The client’s house was located in Thistleton near Blackpool and they had lived there for 20 years. The Property had an outstanding outlook over the surrounding countryside but was somewhat dated and did not make the most of the spectacular views.  It was an exposed site which had the tendency to feel draughty and floor boards had been known to rattle when the wind was strong!  Top of the client’s wish list was a Family Room which would accommodate: a Kitchen Area, A Dining Area and a Sitting Area.

The plan and the flow of family rooms can be concidered very important. We were able to provide a design that enabled a transition from the kitchen, to the dinning area, to the sitting area to outside.

Given that the site had a really good outlook, the design of the windows and the overall fenestration was very important. We spent considerable time looking into the details of the windows so that the final design would have good proportions and give an overall strong aesthetic appearance.

We prepared a proposal that provided extensive glazing to the rear of the property.  This involved using a steel frame system by Keystone Lintels to allow us to maximise the view without the need for extensive brickwork.

An application was made for a Certificate of Lawful Development as the proposal fell within Permitted Development.   This avoided an application for planning permission which would have been difficult to obtain as the property lay in a greenbelt area.

The success of the project lay in creating a space that worked for both day to day use as well as creating a large, bright and impressive entertaining space.

The client was extremely pleased with the finished project and commented that until he had the extension he hadn’t realised how much the sun moved in a day. 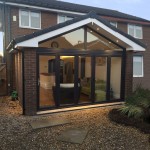 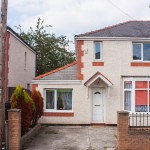 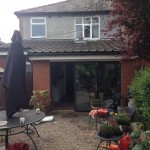